Open daily from dawn to dusk, no admission charge

The San Jose Heritage Rose Garden, or the “Sangerhausen of the West,” is an unexpected jewel located in downtown San Jose. The purpose of the rose garden was to provide a safe haven for important rose species and to connect the public with the rare and beautiful flowers. Special emphasis was placed on choosing types of roses that would supplement the Municipal Rose Garden’s collection.

The criteria for choosing the roses that would be placed in the new garden included:

The Adopt-a-Rose program in the Heritage Rose Garden allows individuals to adopt a rose for a donation of $50 (without a gift package) or $75 (with a gift package), and provides for a plaque to be placed in front of the rose with a personal inscription from the donor. You can adopt a rose at any time of the year. Payment can be complete online, over the phone, or via check. Please call us at 408-298-7657 or email info@grpg.org with any questions.

How to Adopt a Rose:

1.) Thank you for your interest in our Adopt a Rose program! First start by finding available roses to adopt by clicking on the Browse the Rose Catalog button below

2.) Please choose a rose with an empty adoption expiration or expiration that is 3+ years expired.

3.) Visit our donate page and click on the Adopt a Rose option and proceed to fill out the form.  Please allow 2-4 weeks for inscriptions to be made and placed on a plaque.

In 1988, avid gardener Lorrie Freeman and nurseryman Tom Liggett began work to develop a proposal for a rose garden in the yet undeveloped Guadalupe Gardens. In 1992, the San Jose City Council approved and funded the proposal for a heritage rose garden that would be the size of a city block.

Ed Wilkinson, the original Curator, and Liggett, the original Director, spent countless hours establishing the Heritage Rose Garden’s botanical collection. They scoured many places, including old cemeteries and homes, for unidentified rose species. Using Wilkinson’s extensive database of garden rose species that were available worldwide, they also gathered propagating material from gardens and collectors all over the United States and imported bud wood from several of the greatest rose collections in the world.

Liggett, with significant help from the South Bay Heritage Rose Group, grew the under stock, supervised bud grafting, and grew and harvested over 4,000 roses. These roses were replanted in the new garden by over 750 volunteers during the record rains of March 1995. In September of the same year, the vice mayor and other notable members of the city dedicated the garden. Since its beginning, volunteers have constantly cared for the rose garden and planted hundreds of additional varieties.

The size of a city block, the Heritage Rose Garden is the largest public collection of roses in the Western hemisphere with over 3,000 varieties and more than 4,000 planted roses to admire. 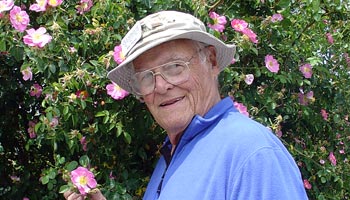 The Mel Hulse Fund was established in memory of our former Heritage Rose Garden Volunteer Director. Funds raised are used to enhance the collection of heritage roses at the garden.

Donate to the fund 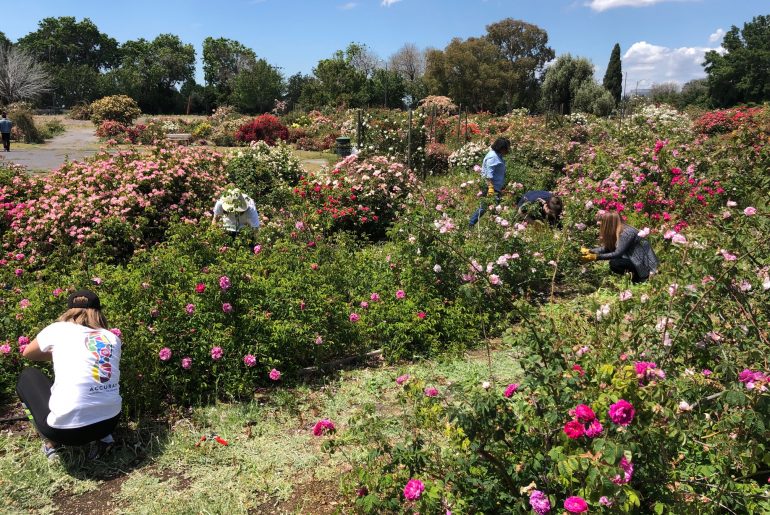 Volunteer at the Heritage Rose Garden

The HRG is maintained primarily by volunteers; projects vary with the time of the year. Find upcoming HRG volunteer events at our Events Calendar page, or contact our Civic Engagement Manager, Sarah, at volunteer@grpg.org for more information. Free pruning lessons will start on 1/5/2021, sign-in at 8:30am and lesson at 8:45am.