Skip to content
Public Art and Landmarks in the River Park

Named after Tony Ridder, publisher of The San Jose Mercury News, this plaza honors his philanthropic efforts within the city. Oversized bronze running shoes symbolize the long run that he made to support and improve San José, and they further serve to give children something to aspire to, filling his shoes with their own strength, community focus, and dedication. 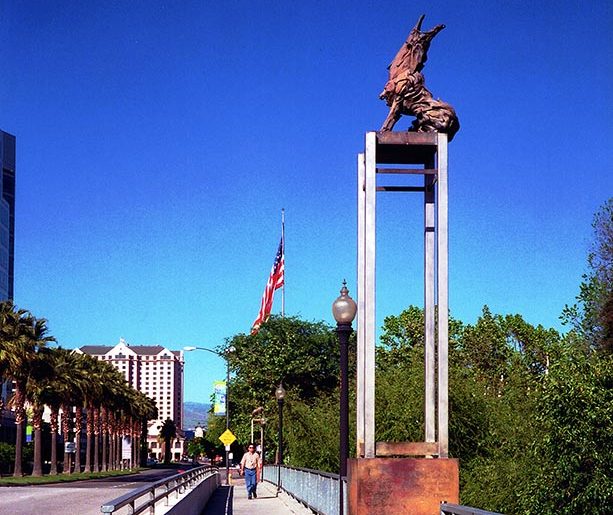 The Muwekma Ohlone people, Native Americans who once lived along the Guadalupe River, are honored with animal sculptures important to their tradition, on the Park Avenue Bridge. These include the Coyote, the Hummingbird, and the Eagle. The four flags that fly from atop the bridge represent the past and present governments of the area: Spain, Mexico, California and the United States. The Coyotes were created by artist Peter Schiffrin; the Eagle and Hummingbirds by Tom Andrews. The Coyote, Hummingbird and Eagle represent the Muwekma Ohlone creation story. Coyote was the father of the human race who was responsible for creating people and teaching them how to live properly. Hummingbird was wise and clever. Eagle was a leader. 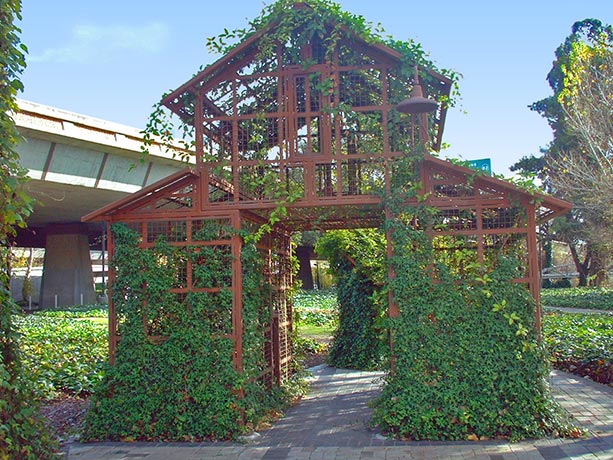 Remembering Agriculture, by artist Tony May, recalls the rich agricultural history that was the driving force behind San Jose’s economy for more than 150 years. The project recreates the distinctive shapes of those once-familiar clusters of farm buildings that are seen less and less frequently in the Santa Clara Valley. The structures include a water tank tower, a windmill, a barn and a small shed, which function as arbors for a carefully chosen selection of ivies and other perennial climbing plants. 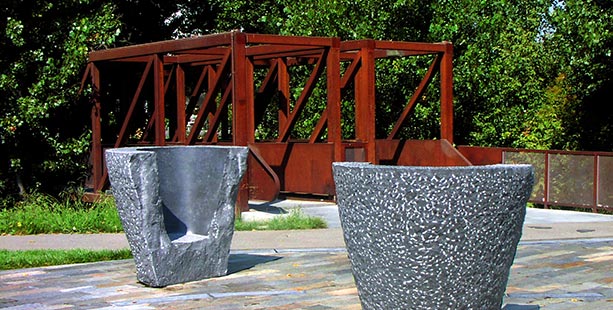 The creation of artist Alan Counihan, The Weavers’ Gifts commemorates and celebrates the Costanoan-Ohlone Peoples, especially the Tamien Ohlone Indians who inhabited the land along the Guadalupe River where the sculpture is located. The Weavers’ Gifts is a site-specific artwork composed of four elements: the names of the 54 Ohlone tribal groups who inhabited California in the late eighteenth century, inscribed on pre-existing granite seat walls; a four-foot high carved-granite basket representing a functional and creative part of the Ohlone culture; a five-foot high carved granite mortar, broken to represent broken tradition; and a stone representation of an unfinished coiled basket inlaid into the paving with inscribed text that speaks to the history and future of the Ohlone people.

The north entrance into Confluence East showcases San Jose as a multi-cultural society. The braided paths list the names of the many ethnic groups that comprise the city’s current demographics and meet at a reflective pool. Cobbles in the Pool of Genes feature the names of children that were submitted by community members to reflect San Jose’s diversity.

An amazing civic leader who dedicated a big part of her life to community, Shirley had a special place in her heart for Downtown San Jose Arts, Guadalupe River Park & Gardens and the Rotary Club of San Jose. These passions fused when she launched the Rotary Sculpture Walk during her term as Rotary President.

As a tribute to Shirley and her passion for the Park and City, the Rotary Club of San Jose in collaboration with the Guadalupe River Park Conservancy created and installed the 20th piece in the Rotary Sculpture Walk: Shirley Lewis sitting peacefully and watching over the kids at play, renamed the sculpture walk Shirley Lewis Rotary Sculpture Walk, and installed a monument to reflect the name.

About the Shirley Lewis Rotary Sculpture Walk
During her term as President of the Rotary Club of San Jose, Shirley had a vision of drawing families with children to and through the GRP for a special experience through art. She knew the importance of public art to a strong downtown, and wanted to create a destination for people to visit. Shirley’s vision became a reality. The first group of statues – cast aluminum figures created by San Jose State University Foundry artists – depicting children playing hide-and-seek and pointing skyward at airport-bound airplanes while launching a paper plane of their own have been a real wonder and discovery for children. The Children at Play sculptures provide the reminder Shirley wanted for people to appreciate their surroundings and remember the excitement of childhood. They also pay tribute to the business life and activity in the Bay Area, as well as emphasize the city’s commitment to community and family. The sculpture walk was a collaboration between the Rotary Club of San Jose, GRPC and San Jose State University Foundry. The very artists at the Foundry that Shirley and her team worked with to develop the first sculptures in 2011-2012 sculpted Shirley herself, as well. Shirley constructed the whole concept of this wonderful sculpture walk, and the importance of the link with the SJSU Foundry.

The Veterans Memorial, located on Park Avenue at the Guadalupe River, is an enduring tribute to the men and women who have served our country in peacetime and in time of war. It was dedicated on November 11, 1997. The Veterans Memorial consists of 76 flags on 30 ft. steel poles, representative of military personnel in formation. They also reflect the tiers of white headstones in a military cemetery. The white flags represent the anonymity of each who serves — white is a sign of peace. The snapping fabric in the winds, contrasted with the serene canopy of white banners, reflects the military strength which preserves our peace. The etched glass panels tell, through excerpts from letters home, the experiences of local veterans during the various wars. The figures in the panels cast shadows on the pavement in front of, or behind the panels, depending on the time of day. 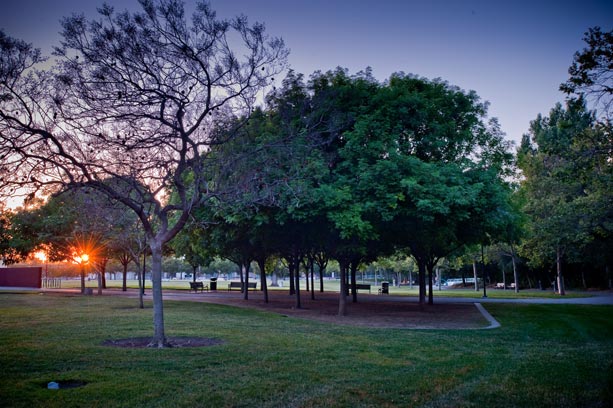 The AIDS Memorial Grove was conceived as a special place for friends and families wanting to honor those who have HIV or have died from AIDS. The Chinese pistache trees were selected for the grove because they are deciduous and renew themselves every year, and because they thrive when planted in groups, where their branches can intertwine.

Sister City Seating Areas commemorate San José’s special relationship with particular cities throughout the world and give residents a tiny glimpse into those cultures. Several Sister City Gardens are in place in the park. Each is similar in scale, proportion and purpose, using plant and paving materials native to each country to express some of the country’s identity and culture. Partially enclosed, the gardens are designed to give visitors a retreat from the pressures of daily life and a window onto the river and its natural environment.

Veracruz and Guadalajara, Mexico
On the west bank overlooking the river and the Children’s Discovery Museum, this homage to Veracruz, Mexico, features rust-colored Adoquin paving stone and cobblestone insets, giving the space the craftsman quality typical of Mexican gardens. The Veracruz sister-city relationship was established in 1975, and with the establishment of a sister-city relationship with Guadalajara in 2014, the two cities share the site.

Okayama, Japan
Okayama’s was the first of San José’s sister-city partnerships to be established, in 1957. This reflective garden sits on the east bank of the river, between the River Park Towers and the Center for Performing Arts. Academy black granite stone interspersed with moss and fine-leafed grasses reflect the peacefulness of a Japanese garden, with a gray Sierra granite seat furthering the simple elegance. A bronze plaque tells the story of Momotaro, the Peach Boy, and a statue of Momotaro donated by the city of Okayama stands watch over the garden. The landscape includes a Japanese maple, heavenly bamboo, and mondo grass.

Dublin, Ireland
Looking south from the steep banks of the Guadalupe River across Discovery Meadow, this garden features a 60-foot tall illuminated flag pole flying the Dublin flag. A poet’s rock, engraved by Irish poet Arthur O’Shaughnessy, has an understory of Irish clover that appears around St. Patrick’s Day. The ground plane is covered with masonry-style cream flueri limestone paving, and a donated historic lamp post sits in the seat wall, not far from a specimen Washington thorn tree. The Dublin relationship was established in 1986.

Tainan, Taiwan
The plantings and colors in this garden reflect Taiwan’s tropical climate. Tree of heaven and bamboo greet the visitor at the entrance, with red granite paving and varieties of tropical grasses setting the mood. This site commemorating the sister-city relationship with Tainan, Taiwan, established in 1977, also features a marble table and benches, donated by the city of Tainan.

Puné, India
From its early days as an agricultural settlement, to its growth under the Maratha (MARAH-THAH) Empire during the 1500’s, Pune, India, has had a long and colorful history. San Jose and Pune established a sister city relationship in 1992 and have carried on a cultural partnership since. Although Pune is known for its rich agriculture and universities, the city has also become one of the largest growing information and technology regions in India. The Pune sister city seating area features a statue that was donated by the city on July 3, 1999. Shivaji founded Pune in 1640 and was a modern warrior who fought foreign invaders and established a Maratha kingdom that lasted for 200 years, with the capital being Pune. To commemorate the statue’s installation, Pune’s Mayor traveled to the park to formally dedicate the statue as a gift to the people of San Jose.

Ekaterinberg, Russia
The site for this garden is located north of Coleman Avenue, but has not been developed yet. 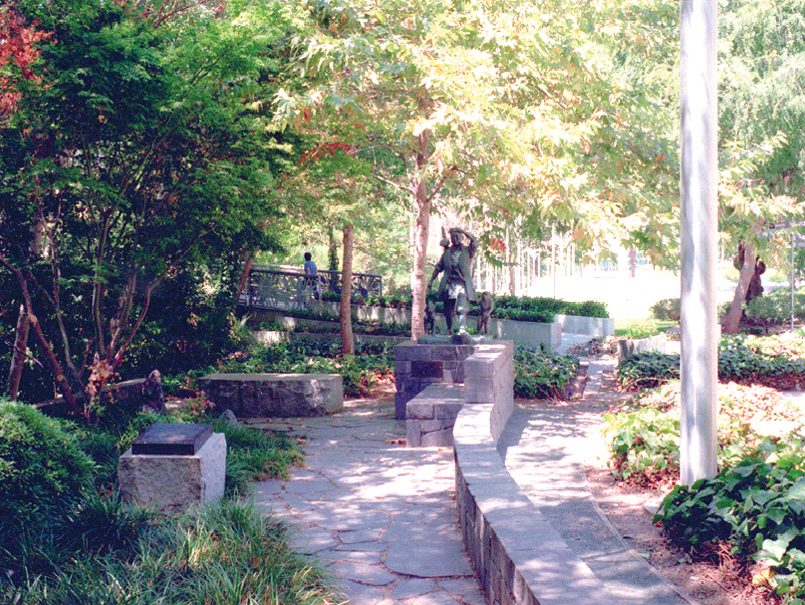